I've tried Trader Joe's Simpler Wines in Peach, White, and now Rose. Which did I like the best? Peach bar none. The white was next and the rose was last for me.

Yes, it's cheap, bubbly, not too sweet, and not too dry. But this one is a touch fruity, but it also tasted as it came out of a can. It is pretty boozy and I found one can sufficient to get a buzz.

Now, I am by no measure a wine snob. Far from it.

It's totally drinkable at a BBQ or at a picnic. But as it cooled in my refrigerator I did not feel compelled to drink more than one at home.

In fact, I haven't touched the cans of white wine either since I reviewed them.

But having a wine you aren't crazy about can be such a bummer. Unless you know what to do about it.

That is the case here. As I was sitting down to write this, I began a search to figure out what else I could do with it. Being that we are at the tail end of summer, I came up with Frose.

But sometimes, I'm just not in the mood to go through the steps. I'll go through it for a big batch, but frose is rarely good the next day.

So if anyone reading this is looking for a business idea of things that you really don't see in the grocery store, but should totally be there, here we go. Adult ice pops.

Popsicles- you loved them as a kid. Put some adult flavored liquid in these and you might be the hit of your BBQ, pool party, or sharing where ever that might be acceptable. Or have one heck of a business, just sayin'.

If you don't think this idea would work, then consider the fact that NYC even has its share of bakeries that sell booze-laced products like Prohibition Bakery.

Booze pops need to be a thing. Poptails maybe? The other wording combination just doesn't work. And yes, odds are you might remember those odd-tasting plastic tubes of ice pops from your childhood. I'm not sure what they were supposed to taste like. But these taste better. And they actually do sell the plastic in that same shape on Amazon.

I'm not a big fan of the molds you have to buy. They work, but this is smaller and far more portion-controlled. And the only extra equipment you'll need is a funnel. No extra storage.

They're inexpensive too. But mixed with the right ingredients you can take a meh-tasting wine and really elevate it into something you can look forward to. Two cans yielded me about 17-18 pops.

For $4.99 it isn't the best tasting rose out there. But it's canned, it's about a buck a can. But if you can find something amazing to do with it, then it's totally worth it. At that price point, there isn't much that does compete with this.

So for me, I now know what I'm doing with my cans of white wine too. And yes, you can get the recipe I tried right here on Mind Over Batter. If you aren't a fan of strawberries it is totally possible you can use other fruit as well.

Would I buy this again? No, but I'm totally making those adult ice pops again. I'll save the Peach wine for drinking and now I have a way to use my white wine.

The information on the bottom of the package:

Out of the package, you get a can that looks like this. Two cans yielded about 18 fun adult ice pops: 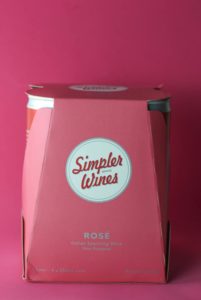 Trader Joe's Simpler Wines Rose is limited to just the stores that sell alcohol, but is affordable enough for everyone to try.