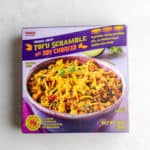 There are some products that are almost unspoken gems that if you speak to die-hard fans they will profess their love for.

There are some products that Trader Joe's has run the cash cow dry on.

But soy chorizo? It's a hidden gem. I haven't seen it really used in any other application other than the unsuspecting plastic tube in the refrigerated aisle.

Table of Contents hide
1 The taste
2 The packaging
3 Overall
4 A visual rundown of this product
5 The Bottom Line
5.1 Trader Joe's Tofu Scramble with Soy Chorizo
5.2 User Review
5.3 Like this:
5.4 Related

This product is geared towards those who might be focused on a vegan diet. For those of us who are non-vegan, I want you to imagine a western omelet made vegan. That's basically what you are getting here.

But when you are making an omelet and making it vegan then there are a lot of things you'll need to sub out. In place of eggs are shreds of tofu that sufficiently mimic eggs. I was actually dreaming about folding some of this product into an omelet.

But the bowl itself is quite filling. I stopped halfway. Not because I didn't like it, but because I was feeling full.

There is lots of spinach and bell pepper in this along with a nice helping of the strangely melted vegan cheese which never quite melts like the real thing.

Did I want to make a breakfast burrito with it too? Totally.

And if the tofu isn't enough soy product for you then there is some soy chorizo in this as well. It didn't quite lend as much as I was hoping for. So if you like your vegan tofu with a bit more fake meatiness then you might still want to keep a tube of the soy chorizo around to supplement it.

But while the veggies filled me up I also found myself to be quite thirsty. You see this is nearly half a days worth of sodium. And for some of you, that is a non-starter.

But overall the taste is decent enough for a freezer meal and I think you could easily make two servings out of this if you were using this as filling in a breakfast burrito. It could easily be added to real eggs to make a more filling omelet too.

The packaging is pretty standard. The microwavable bowl comes in a box. The bowl has plastic covering the top. There really isn't much in the way of excess packaging.

For $3.99 this isn't a bad dish, but for me, it is a one-time purchase. The taste was fine, although it could easily be jazzed up with more cheese or thrown into a breakfast burrito. At the end of the day, the soy chorizo didn't shine as much as I was hoping for. And this tasted quite salty overall.

Would I buy this again? Because of the sodium content, I'm going to pass on buying Trader Joe's Tofu Scramble with Soy Chorizo again. It was good but not good enough to justify it.

The box of Trader Joe's Tofu Scramble with Soy Chorizo: 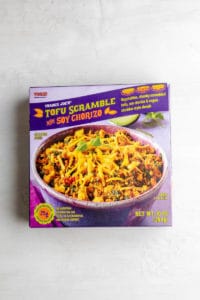