Turkey and Stuffing en Croute. In plain English, as the term, "en croute" means in pastry in French. To me, this looked almost like a Thanksgiving play on Beef Wellington (except for the obvious holiday substitutions). I was excited when I found this in the frozen section. If you can plan a day ahead and give yourself an hour or baking, then this makes a really nice dinner. My household is smaller. Two people and a cat to be exact. Unless we are having company making anything bigger than a roast chicken isn't going to happen. However, Trader Joe's Turkey and Stuffing en Croute was pretty solid.

You'll need to leave yourself a bit of extra time for this product. From the freezer, you'll need to allow it to defrost for 24 hours in the refrigerator. Out of the box, you are getting three distinct bags: the turkey en croute, gravy, and cranberry sauce. While the directions don't mention it, be sure to put the seam side down to make sure this stays sealed. After an hour in the oven, you'll have a very presentable dish.

The key to success here is allowing this the time to rest. I wish I would have waited another 2-3 minutes before cutting into it. My first slice wasn't as pretty as the ones I waited a bit longer on. Now, there is one other point that is important to note. Puff pastry can be a bit of a pain to cut into and still have pretty slices when you are done. The box says there are 8 servings, but I would imagine that you might mangle this trying to cut it so small. I think 4-6 slices is a bit closer to reality. It did not help that the first slice I cut into on the end did not actually have any turkey in it. While this might be a carb-lovers delight, it might disappoint a dinner guest without planning for leftovers.

Once I got past the first slice that just happened to have no turkey in it, I found the rest of the product to have a filling amount of turkey. Now, this stuffing is quite different from say Trader Joe's Riced Cauliflower Stuffing. Trader Joe's Turkey and Stuffing En Croute is less health-conscious and meant for the carb lovers. I liked every bite. There was a nice crispness from the puff pastry which was coated in butter and herbs. The turkey was cooked through and was nice and tender. The stuffing was quite soft (so crispy stuffing lovers be aware). The stuffing also lent certain flavors to the turkey, like the taste of black pepper, but otherwise was nice and flavorful.

As an added bonus there was gravy and cranberry sauce already packaged. While I thought the bags seemed a bit small to go along with "8 servings," I almost found them to be not too necessary either. The cranberry sauce was tart and acidic. It had a distinct flavor of citrus in addition to cranberry. The gravy was just ok. It wasn't as flavorful as I would have liked, but I did not want much of it anyway because I did not was to ruin the crispy puff pastry. If you know your dinner guests are gravy lovers, then consider picking up some extra gravy. Mine did not fill even one of my coffee creamers to make for a pretty presentation.

Overall, this was very good. It was tasty and would make for an impressive looking meal for dinner or guests. For $12.99 this like most of Thanksgiving in a box minus the veggies and mashed potatoes. To not have to stress or prep, this was a good value. I'll pick up a few of these to keep in the freezer for a nice Sunday dinner. It would be nice to serve this as a Friendsgiving dinner as well.

The box of Trader Joe's Turkey and Stuffing En Croute: 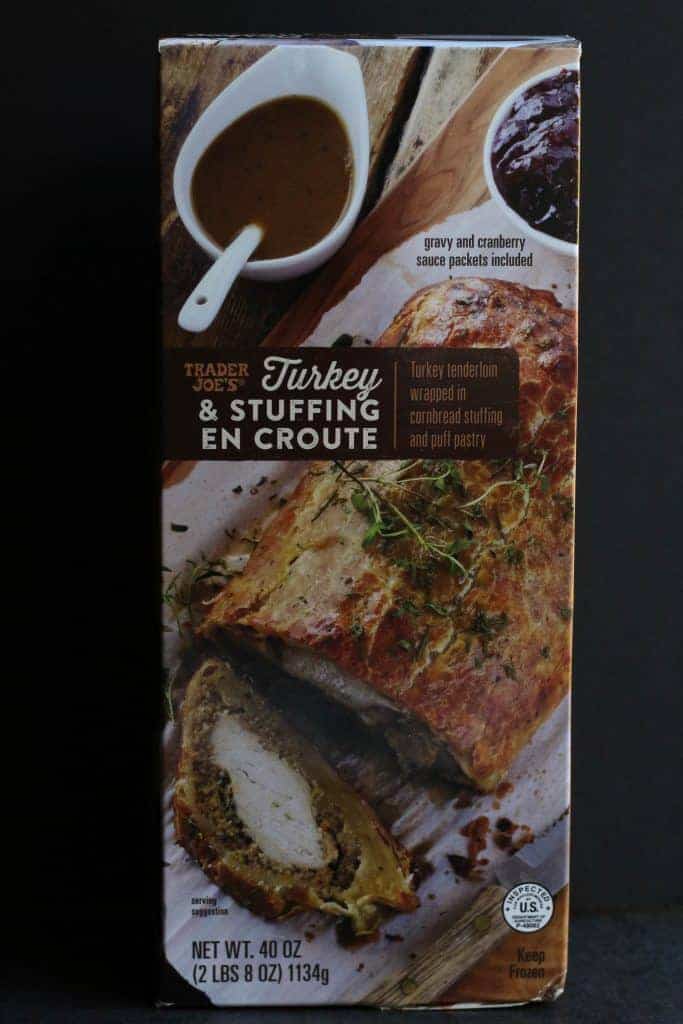 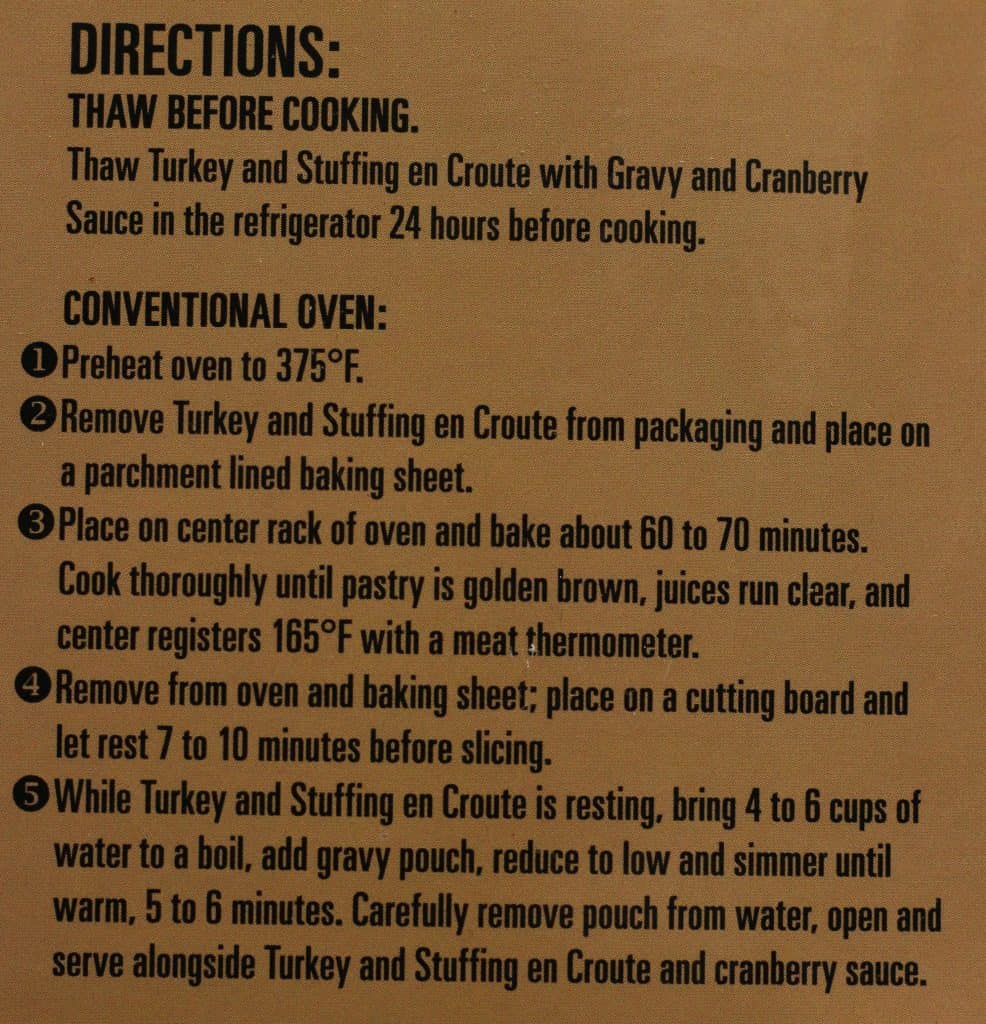 Out of the package you get three plastic bags: 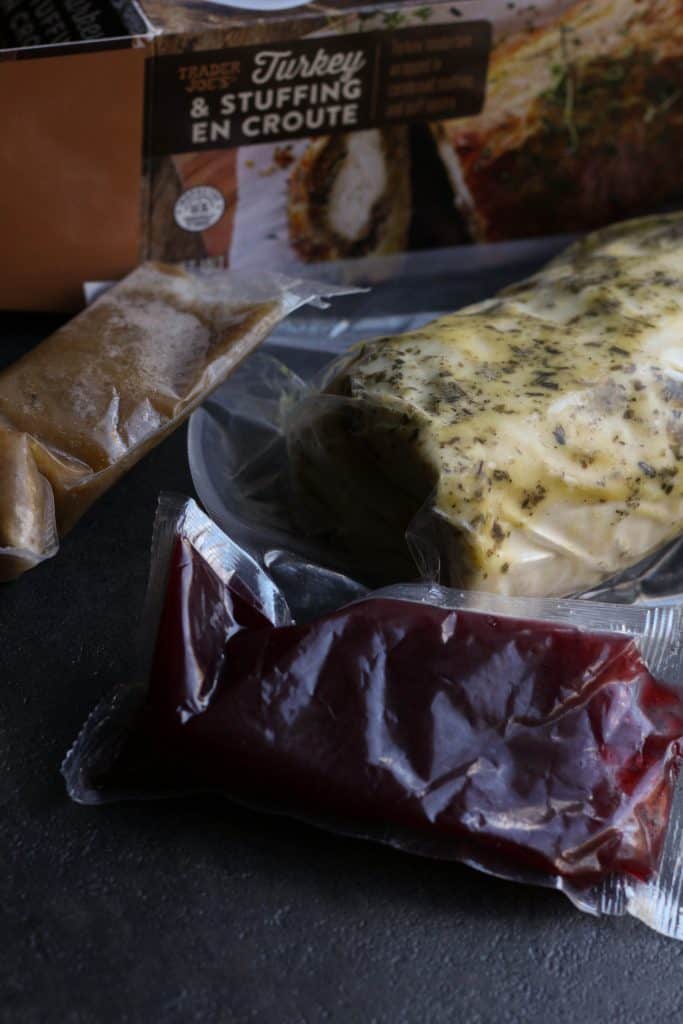 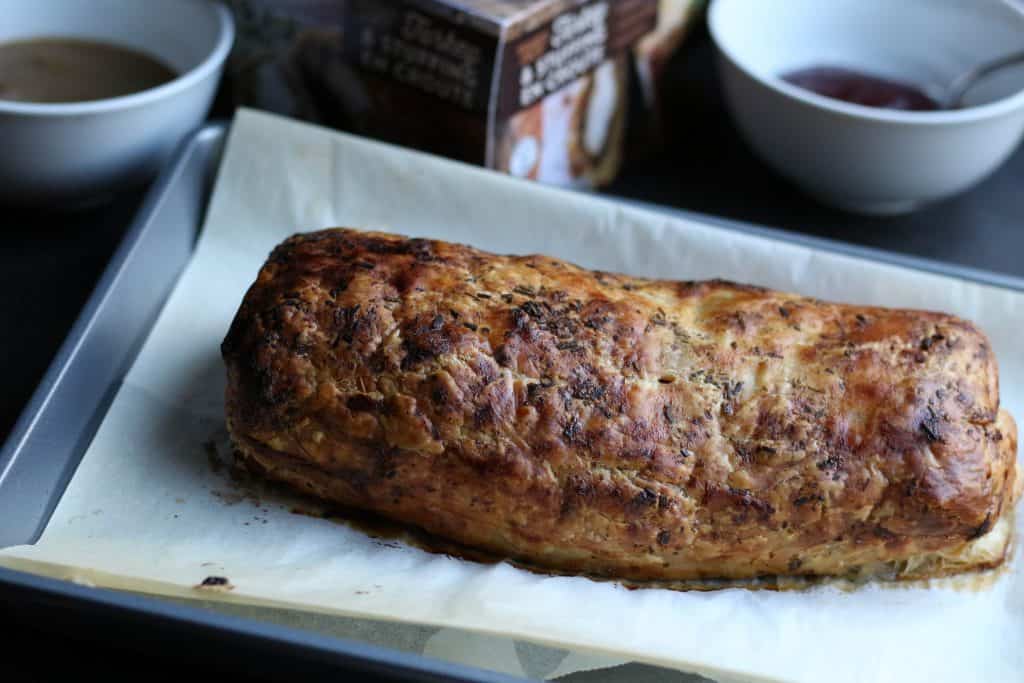 And sliced up you get: 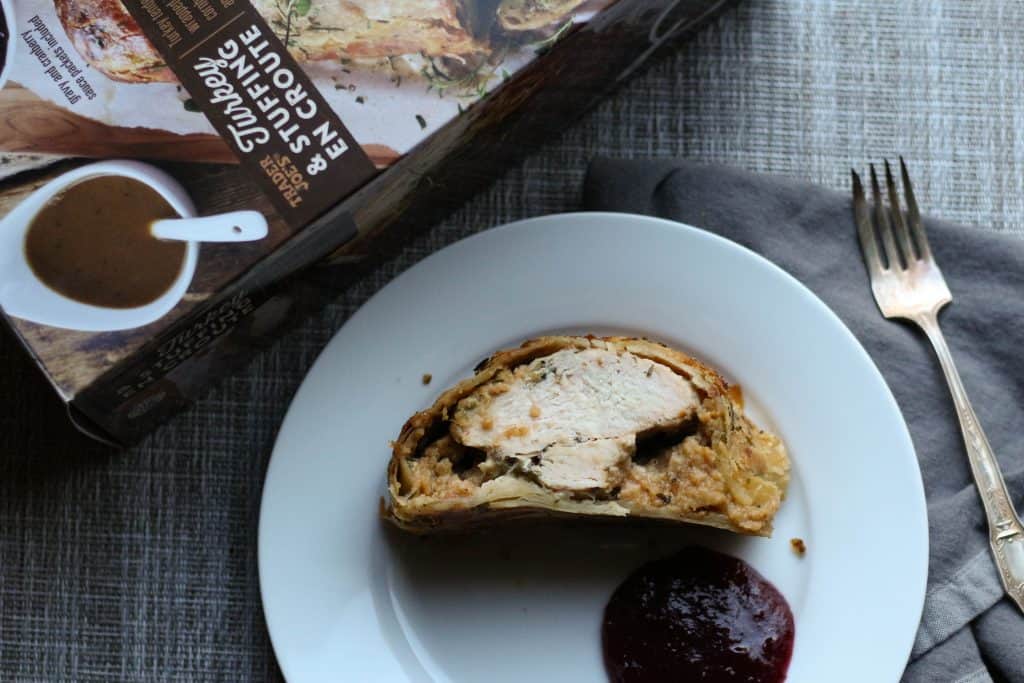 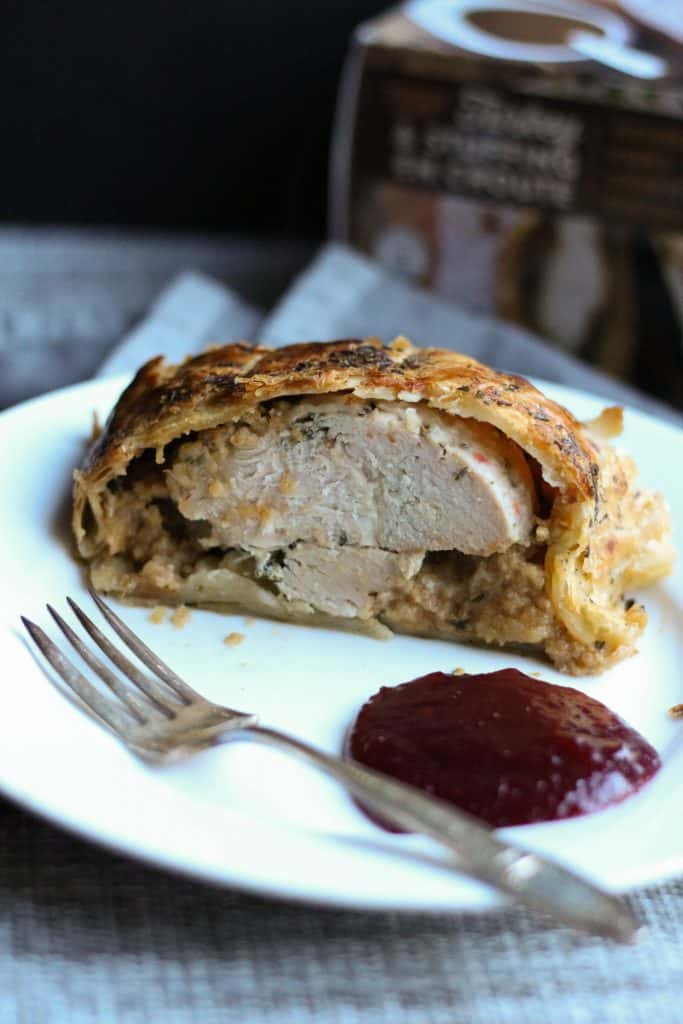 While not perfect, there was one slice that came out as all stuffing. While some wouldn't see that as a problem (who wouldn't love pastry wrapped stuffing), serving this you'll have to adjust. Here is the side by side on two different slices of Trader Joe's Turkey and Stuffing En Croute:

Would I repurchase this? Yes, I would actually consider keeping a few of Trader Joe's Turkey and Stuffing En Croute in the freezer before they are gone for the season. It made for a carb-lovers delight. Other than a few minor issues, I really liked this. For me, this was worth the money, just in the time-saving aspect alone. 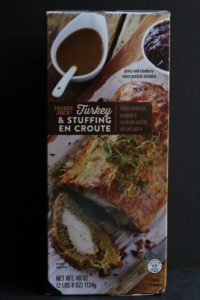 Trader Joe's Turkey and Stuffing En Croute is a returning classic perfect for Sunday dinner or a small gathering on Thanksgiving.