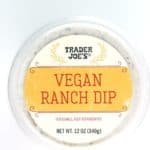 For the most part, when I want Ranch dressing or dip, I make it at home. I found a mix I really love and it only takes 2 ingredients to whip up a dip that tastes better than store-bought. It doesn't last as long as store-bought, but then I make enough that I would consume. But usually, those two ingredients are often: mayo and buttermilk. Neither are vegan-friendly items. However, when I saw people raving about Trader Joe's Vegan Ranch Dip I was curious as to how good it could be.

How do they go about making this creamy especially now that Trader Joe's Vegan Mayo is a thing of the past? Well, this is coconut cream and canola oil. The rest are the expected herb and spice combinations that you've come to expect in a Ranch.

Now despite my expectation that this will be strongly coconut, it actually tastes quite strongly of the vinegar. It does have a bit of a bite to it.

But when you are crunching down a small plate of carrots it becomes a pleasant acidity.

However, if I'm being honest, it tasted somewhere between a cross between a ranch dip and a tartar sauce without the pickles.

I know that sounds very weird, but that is pretty much how much bite is in this.

But this becomes an interesting item. It could be used as a vegan mayo with the right pairings.

A lot of me wishes that they would pick a different oil to make some of the dips. I was hoping that this would be a keto friendly option, but sadly it isn't much like my beloved Garlic Spread.

But at the end of the day, it is a low carb vegan friendly option. It is intensely herbed and tastes very much of chives and all the other yummy herbs that go into a ranch dip.

I liked it and it was fun to try.

Would I buy this again? While I liked this, the vinegar was a bit too much for me. And for the calories I'd rather reach for the Garlic Spread and Dip instead. 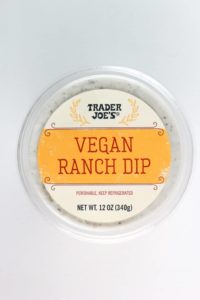 Trader Joe's Vegan Ranch Dip is new and is found in the refrigerated aisle.