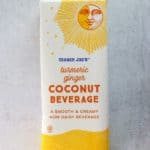 If one area has been consistently expanding, it is the non-dairy options at Trader Joe's. While I've tried some interesting flavors from blueberry lavender to matcha to the seasonal chocolate peppermint, Trader Joe's Turmeric Ginger Coconut Beverage is far and away in a class it's own both in taste and in color.

First off, for those who are unfamiliar, golden milk has been around for a while. Its popularity has risen over time. And let's admit something: anything brightly colored ends up being popular on most social media channels. Health and wellness sites, report there are various potential health benefits to adding turmeric to one's milk. However, you are always free to do your own research on the matter.

And when I mentioned brightly colored, I mean this is the brightest thing I've seen without artificial coloring. It pours like a thinned-out French's Mustard (which also has turmeric to it).

Now, unlike all the other non-dairy drinks I mentioned, this one stands out, but I don't think this is going to resonate with everyone.

This drink tastes mostly of turmeric as there is a mildly spicy ginger-like flavor to it, which might also come from the ginger juice that is present here. Adding to the mild spice is the addition of black pepper.

One thing that is surprising here is the addition of honey. Although this product seems to try to appeal to a lot of groups: dairy-free, gluten-free, and soy-free, this product isn't vegan due to the presence of honey. Using maple syrup instead would have allowed this to be a vegan product as well.

But overall the flavor here was subtly sweet, mildly coconut-y, spiced with ginger. But most importantly, it did have that milky creaminess despite being nondairy. Well done on that end.

That being said, I tried this two different ways: cold and warm.

I preferred this slightly warm rather than chilled in the refrigerator. I felt like the flavors were more enjoyable that way due to their spiced nature of them. In either case, this was a fun item to try but wasn't my thing.

Now full disclosure, this was my first time having golden milk, so if anyone has a comparison point I'd love to hear from you.

I'm not too sure how many pre-made ready-to-go golden milk drinks are out there, although there are some that are in powder form. But in all fairness, with a decent spice cabinet, this is something that can be made at home.

Would I buy this again? No, I won't be buying Trader Joe's Turmeric Ginger Coconut Beverage again. 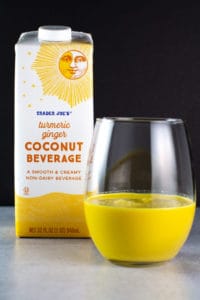