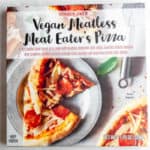 Pizza is a nearly perfect food. I know so few people who dislike it. Best of all it seems that it can fit into nearly every diet out there. So Trader Joe's has done the difficult: added a plant-based meat lover's pizza to its roster of products.

Table of Contents hide
1 The taste
2 The packaging
3 Overall
4 Trader Joe's other pizza reviews
5 A visual rundown of this product
5.1 Calories and the ingredients
5.2 Directions
6 The Bottom Line
6.1 Trader Joe's Vegan Meatless Meat Eater's Pizza
6.2 User Review
6.3 Like this:
6.4 Related

The chorizo is nice and spicy and the sausage is pretty darn close to where the real meat would be. It isn't quite the same as Trader Joe's Soy Chorizo. The spice blend is slightly different here.

The pepperoni here visually looks like thicker cut pepperoni, but the taste and texture were a bit off from where real pepperoni would be. The pepperoni is on the dry side with a big lack of the familiar mouthfeel the real stuff here. But if you just happen to bite into it without pulling it off the pizza, then it becomes more passable as the real thing.

As a native New Yorker, the most notable thing missing from this pizza is the traditional greasiness. Vegan mozzarella-style shreds can be ok but always seems to look like plastic when heated up. The taste of the

The taste worked but visually this wasn't the most covered-up pizza in the world.

I found the top of this pizza to be a bit bare and the taste of the crust and sauce were actually the primary flavors here. Not that there was much sauce like a Grandma slice, but there were gaping areas where neither cheese nor vegan meat covered the pizza and that was a shame.

Now, another complaint here might be that this isn't gluten-free either. But that being said the crust was fine.

The cooking directions were spot on to achieve a nice crispy crust. Just be sure when removing this from the oven that you place it on a rack to cool to ensure that you don't get any soggy bottomed pizza. If you place it directly from the oven to a cutting board you'll give up that crispness.

But overall, if you are dairy-free or vegan then this isn't a bad option. Even if you aren't vegan this actually wasn't a bad pie. You probably won't miss the additional greasiness that comes with many other pizzas here. But you might feel just a little weird looking at unmelted vegan cheese shreds.

The packaging here is pretty basic. It comes in a box. The pizza is shrink-wrapped inside the box to keep the contents of the pizza just on the pizza.

While this isn't a bad choice, the pizza isn't quite as loaded as the name might lead you to believe. However, it isn't a bad bite for under $6 either. But you might want to add just a bit more vegan cheese to cover some of the gaps left here.

If you are gluten-free you'll be disappointed that this item is not gluten-free.

If you are thinking about sharing this, this is closer to two actually servings rather than what is listed on the box.

Would I buy this again? I'd consider buying Trader Joe's Vegan Meatless Meat Eater's Pizza again. While the target audience for this pizza is those who are dairy-free or vegan, I didn't feel like I was missing that much in partaking in this pizza.

Calories and the ingredients

After being baked in the oven you get: 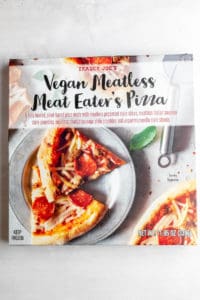 Trader Joe's Vegan Meatless Meat Eater's Pizza fills in a gap in the freezer space for vegan pizza. But not any vegan option a full vegan meatless pizza option.