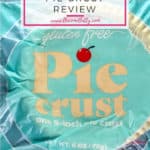 Easy as pie. Or at least that is how the saying goes. But what about the gluten-free crowd? Making pie without flour can be a bit of a challenge. However, just in time for the holiday season is Trader Joe's Gluten-Free Pie Crust in the freezer section. It's already shaped and even has its own pie tin too. But how does it compare to a non-gluten-free crust?

So let's review the basics of pie crust. It's usually flour, butter, ice-cold water, some salt, and some sugar. Nothing too fancy because truth be told you want to keep is simple as the filling is the star.

Here we have the first ingredient as butter. No wonder it is in the frozen section.

But beyond that we have some ingredients you wouldn't normally find in a traditional pie crust: rice flour, tapioca flour, cornstarch, and even eggs. All items that are needed to compensate for the lack of flour.

So, I decided to make a filling that I felt would be sufficiently challenging for a pie crust: a chocolate bourbon pecan pie. The filling is very liquid in nature, so it would present the perfect challenge for this item.

First, you'll need to defrost this (in my case, it was picture time). I had also preheated the oven. I docked the crust as instructed. Don't overlook this step as mine did develop some air bubbles while blind baking this.

In the meanwhile, the ingredients were put together for the filling while the crust was baking (and then cooled to room temperature).

The pie in this bag isn't terribly large: just 9 inches. It is probably close to 6 servings than 8. But if you are making a pie where a pie crust needs to go on top, you'll need to pick up a second crust. And at $3.49, this little pie will get pricey.

But after filling the pie ⅔ of the way up, it went into the oven for 40 minutes. But with any pie, it is the waiting game. As bubbly and delicious as the crust looked, it had to cool to be enjoyed.

After a slice, I realized that the taste of this crust is a bit on the bland side. But then again, the filling is meant to be the star. The crust seems much thinner than other frozen crusts and by docking the crust (on the bottom and on the side) it did end up poking some holes through the crust. That was kinda of a bummer because it meant that I couldn't remove it from its tin pie pan.

Regardless, even with such a liquid, eggy filling, it held up quite well. It even had some layers at the bottom. But where I felt it was the most bland was actually at the top where the ruffled edge is.

Because of the amount of time in the oven, that seemed the most dried out and tasteless. So I just enjoyed everything but the top.

I think if you are gluten-free or have company that is gluten-free, this isn't a bad option to reach for. I still prefer the taste of a regular pie crust. But I didn't feel like I was missing out too much either.

Would I buy this again? For me and my guests, a regular pie crust will do, but if you are gluten-free then this is a good option.

A closer look at the crust after being cooked: 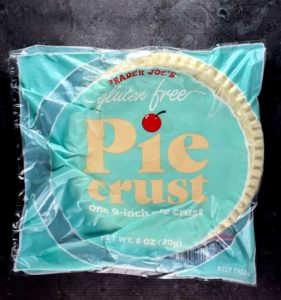 Trader Joe's frozen holiday gluten free pie crust is a good option if going gluten free is a must this holiday season.