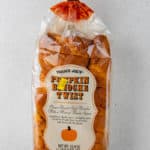 No, you aren't seeing double. There are two pumpkin brioche bread varieties on shelves at Trader Joe's. This review just deals with the twist variety.

Table of Contents hide
1 The taste
2 The packaging
3 Overall
4 A visual rundown of this product
5 The Bottom Line
5.1 Trader Joe's Pumpkin Brioche Twist
5.2 User Review
5.3 Like this:
5.4 Related

If you are familiar with Trader Joe's French Brioche sliced bread then you know what a treat that is. It's a perennial favorite and a pretty good value. I've seen brioche bread being sold closer to $7 a loaf.

The bread itself is light and airy. It gets nice and crisp in the toaster. But always keep an eye on it in the toaster as these slices are about twice the size of a regular slice of bread.

Now, these slices are subtly pumpkin flavor. But they have a swirl of spice to them. I tried a slice toasted without anything on it.

And wow, did it remind me of French Toast without the effort (and egg). It tasted slightly of brown sugar and pumpkin pie spice. After the first bite, I was hooked. And I was calculating future freezer space for a few more of these.

Each slice is a little bit of fall. It isn't too pumpkin-y. It's enough to remind you the flavor is there, but that swirl adds that special something.

Now, with each bite, my imagination was running on what else I could do with these slices. Yes, awesome French toast was on my mind. I even thought about making stuffed French Toast. What would I stuff it with? Trader Joe's Pumpkin Cream Cheese. Or maybe some Maple butter on top just to push it over the edge.

I know the bag does mention nut butter as a topping but I think I'd prefer sticking to the fall flavors here.

But yes, I've already imagined how divine each creation could be.

And yes, French toast, bread pudding, grilled cheese, croutons, and eggs in a basket are all on the shortlist.

The bag this comes in is different from the plain brioche variety. It seems easily breakable and rippable.

I have yet to meet a brioche I didn't like. This is no exception. If you want the taste of french toast without any effort then don't hesitate to pick this up.

Would I buy this again? Yes, I would buy Trader Joe's Pumpkin Brioche Twist again. Like I said, my freezer is going to get some reorganization. This is a seasonal variety so when it is gone it is gone.

For $3.99 this is a solid value and very tasty. Worthy of a repurchase any day. 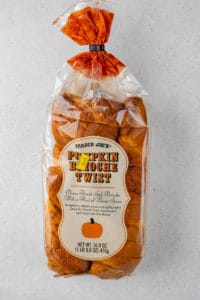 Product Description: Trader Joe's Pumpkin Brioche Twist is new and has a nice balance of spice to compliment the pumpkin flavor.